Deron Williams did a beautiful job against the Thunder defense last night.

There were plenty of game balls to go around after last night's victory against the Thunder. You had Joe Johnson scoring a season-high 33 points. Brook Lopez was dominant, with 25 points in 29 minutes. And Deron Williams had what may have been his best game of the season, scoring 19 points and dishing out 13 assists.

What really made Williams' performance so great was his game recognition, especially against a Thunder team that likes to set high traps on pick-and-rolls. The adjustment, followed by the conclusion that Williams didn't need to "do too much" in order for the Nets to win.

With the many issues Williams has had to deal with this season -- offensive struggles, fatigue, the Avery Johnson "situation," etc. -- it's been on him to figure out just what is wrong with his game. But after last night's performance, it's certainly worth our time -- and Mike Prada's efforts -- to talk about what went right.

Prada, over on SB Nation, praised Williams for his adjustments against the Thunder last night, which ultimately lead to his creating wide open shots for his teammates.

I have been critical of Williams' decision-making before, and I have honestly been more disappointed by this element of his struggles than his poor shooting. Too often, Williams has tried to do too much. In this game, though, he navigated Oklahoma City's pick-and-roll traps beautifully and didn't try to beat them himself.

He then goes and breaks down three sets, showing frame-by-frame how Williams makes the adjustments against the pick-and-roll traps. 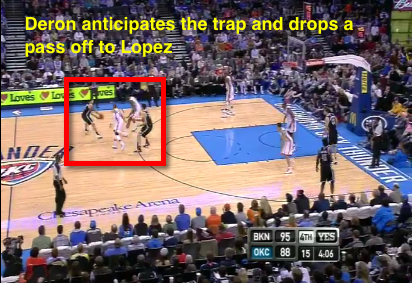 It really is a great breakdown on something Nets fans hope to see more of from D-Will. It's important that he recognize that he doesn't need to score 20-plus points per game in order for this team to win, but instead he needs to make the proper adjustments and create offense for his teammate -- adjust to what the defense gives him.

Really, it's probably in both his and the team's best interest that Williams continues to not "do too much."