Share All sharing options for: Forbes values the Brooklyn Nets at $530 million

According to Forbes Magazine, the Brooklyn Nets are currently the 9th most valuable team in the NBA, coming in at $530 million. 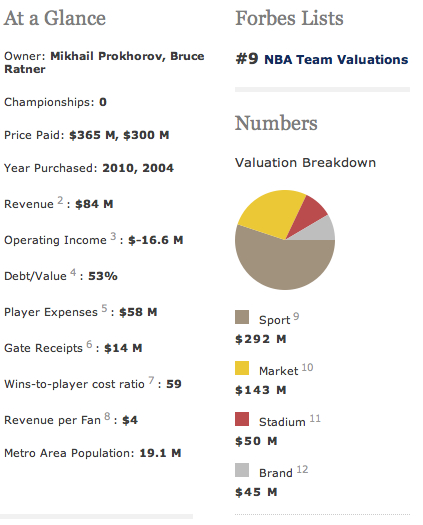 One interesting note, the Nets are the only team in the Top 10 in terms of value that are operating at a loss -- $16.6 million.

The Nets posted the NBA’s second-biggest operating loss in their final season playing in Newark’s Prudential Center, but it is a new era for the Nets after their move to Brooklyn and the opening of the Barclays Center. Jay-Z, a small investor in the Nets, opened the arena to rave reviews with a series of eight concerts in the fall. The team is adding the NHL's Islanders as a tenant starting in 2015, which will help offset the arena's operating expenses. Russian billionaire Mikhail Prokhorov owns 80% of the Nets and a 45% stake in the arena, while real estate developer Bruce Ratner owns a controlling interest in the Barclays Center and will operate the arena. Ratner also owns 20% of the basketball team.

The top valued team in the NBA is, as you would imagine, the New York Knicks ($1.1 billion), while the Los Angeles Lakers are just behind them at $1 billion. The Bulls, Celtics and Mavericks round out the Top 5.

Interestingly, the Sacramento Kings, who were recently sold to a Seattle investment group are 11th on the list at $525 million, which is what the investors paid for the team.