Remember when the Nets had two different coaches of the month in less than three months?

Share All sharing options for: Remember when the Nets had two different coaches of the month in less than three months?

My first thought was, "Wow, that's pretty crazy when you think about it." With P.J. Carlesimo and the Brooklyn Nets undefeated this month (6-0), it's certainly conceivable that after Avery Johnson took home the award in November, Carlesimo is on track to possibly win the award in January.

So, when was the last time that happened?

You have to go all the back to 2003-04, to see the one and only other time a team has offered up two different coaches of the month. And, of course, the team was.... the New Jersey Nets. 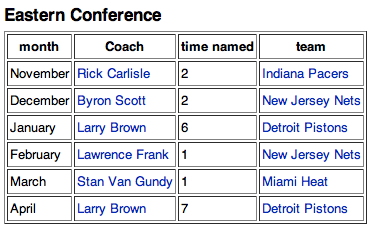 Byron Scott had lead the team to a 10-5 record in December, only to see the team slide in the following month, closing out his tenure with the Nets on a 5-game losing streak. Enter, Lawrence Frank, who coached the Nets to a remarkable 11-2 record in February.

Two different coaches, in three months, on the same team, winning the Eastern Conference Coach of the Month award.