This offseason promises to be one of the most important in the history of the New Jersey Brooklyn Nets. In the coming weeks, we'll be looking at free agents that can help the Nets presently and in the future. Who's leading off this series? 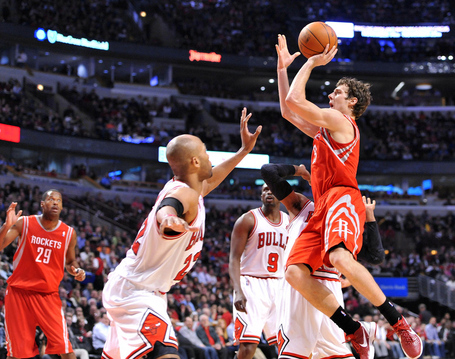 Follow the jump and we'll talk about Goran Dragic.

Let's begin our free agency adventure with a quote from Dallas Mavericks President of Basketball Operations Donnie Nelson from an ESPN Dallas article in May. He was speaking about the possibility of Deron Williams not signing with Dallas:

"You've got to have your A, B, C, D and E and so on. Things are moving and situations are fluid. You go into it with eyes open and hopefully you come out of it with what you want."

That's certainly a mindset the Nets and other teams need to share. The main target is obviously Deron Williams, but in the event that he goes somewhere else, Billy King and Nets management need to have backup plans. Goran Dragic represents option B.

So how did Dragic's season compare to the league average NBA point guard & his own career? Let's get into the numbers:

It was a career year for Dragic, and the numbers bear it out. He didn't get much PT with Phoenix, and that's understandable due to the presence of Steve Nash. He played well for a Suns team that eventually lost to the Los Angeles Lakers in the 2010 Western Conference Finals. He struggled mightily in his final Suns season, including suffering a foot injury at his house. He was traded to Houston in 2011, but he found himself on the bench once again, this time due to the presence of Kyle Lowry. Lowry suffered a bacterial infection this year which caused him to miss a ton of time (and now, he's pissed off), which allowed Dragic to step into the starting lineup. And Dragic stood tall.

One thing that really stood out about Dragic was his ability to finish at the rim. He was one of the very best point guards in this regard, as he shot a very impressive 67% around the rim. This becomes even more impressive when compared to the Nets, who have been one of the worst teams finishing around the rim for three seasons and running.

From his time as a Sun to the present, Dragic has always been a solid passer in the minutes he's been on the court (career 6 assists per 36 minutes). Although it would be extremely premature to speculate on how the rest of the Nets roster will look come Opening Night, I think he would rack up a good amount of assists if he were to join the Nets.

Let's take a look at one of Dragic's better games this season:

Whenever a team looks to acquire a new player, we have to look at how the new guy played the year before versus the player who was at his position the season before.

Hmm, Dragic's career year is better than Williams' worst season. Who knew? But if I could be serious for a minute, here's where we need to apply some context to the numbers. For starters, Williams missed time due to a calf injury while Dragic's only reported injury was a right ankle injury that didn't cause him to miss any time. Another thing to note is that because Williams had no real useful offensive players around him, he had to use a sky high amount of possessions (think Kobe-lite levels of usage rate) and that had a negative effect on his efficiency. We also have to take into account the presence of Kyle Lowry, which caused Dragic to start the season on the bench. Dragic became the starting point guard on March 10 against the Nets, and remained the starting PG for the remainder of the season. And during that 25 game stretch, he averaged around 38 minutes per game as the Rockets fought for a playoff spot. In all likelihood Williams will be the better player going forward, but I think it's safe to say Dragic will play at a level similar to this going forward.

How did the Rockets fans view Dragic? BD34 of The Dream Shake had this to say about Dragic and ex-Net Courtney Lee (insert disrespectful remark here) in his season review of the Rockets:

o When injuries began to hit the Rockets Courtney Lee and Goran Dragic stepped up to put a hurting on other teams. These guys were pleasant surprises when the team needed someone to step up. Goran made many forget about Kyle Lowry and quickly Kyle’s most ardent supporters to anoint Goran a worthwhile starter. Courtney Lee happily reminded Rockets fans he started as a rookie for an NBA Finals Orlando Magic team. He is not a marquee two-way player but this team lacks the kind of two-way players you need (Only boasting Kyle Lowry and Courtney Lee in my opinion).

The tricky thing about contract negotiations is that you never wanna overpay a player because if they don't produce, they become a major drag on your salary cap (hello Travis Outlaw!). With that being said, if I were the General Manager, what contract would I offer Goran Dragic?

Why 3 years and $27 million? For starters, I don't think any other team will go over this number so we don't have to worry about being outbid. Also, Dragic has been improving so he's a good bet to maintain something close to his career year. Writing for the mothership, Mike Prada had this to say about Dragic:

Here's where the "development is not linear" concept really comes into play. What we failed to realize is that Dragic's poor experience running the Suns' second unit at the beginning of the 2010-11 season actually was necessary for him to grow as a player. It's one thing to tell Dragic that he needs to develop as a leader, improve his right hand and adjust to different defensive schemes. It's another thing for Dragic to experience those shortcomings and how they affect his game. Since becoming a starter in Houston, Dragic has become much more dynamic on the pick and roll and has done a masterful job organizing Houston's offense. Without that failure in Phoenix, how would he know how to improve in those areas?

That experience will guide him in the future. This deal would provide the Nets flexibility to add other players via trade or free agency. And most importantly, the deal is short enough that if he doesn't work out, the Nets aren't hampered too much by it.

What teams would be bidding for Dragic? There are a few, but with one big caveat. Teams that figure to be in the hunt for Dragic are the Toronto Raptors, Portland Trail Blazers, Houston Rockets, Phoenix Suns*, the Nets and Dallas Mavericks. The big caveat for the Nets and Mavs of course is Deron WIlliams.

*Where Steve Nash & Jeremy Lin end up as well as the Draft can play a role in the destinations of the free agent point guards too.

While I'm sure most Net fans (and especially the Nets marketing staff) would think that Williams leaving for whereever would be an unmitigated disaster, that may not be the case. Dragic is a good young player that figures to provide solid point guard play in the coming seasons. Williams, while considered to be one of the best point guards in the league, hasn't really lived up to that standard as a Net. Here's what I wrote when I did a "Season in Review" post for Deron:

As we all know, Deron will be a free agent this offseason. I honestly don't know where he'll end up so I won't guess. The primary competition for Williams' talents will be the Dallas Mavericks, although there might be some sleeper team that'll try to make a play for Deron. He'll end up getting the max, although I'm wondering if his play actually warrants it. He's battled injuries the past two seasons, and while he is a good player, his past performance (& likely future play as well) hasn't been at that tip top level that max contract players should be at.

Of course, just adding Dragic wouldn't push the Nets closer to contention, and that's where good GMing comes into play. Even with Williams, I don't think the Nets roster is good enough to make a deep run into the playoffs, so Billy King is gonna have to make some shrewd moves.

Next up in this series: Ersan Ilyasova of the Milwaukee Bucks