As this offseason rolls on, we'll take a look at another player that appears to be on the Nets' radar. 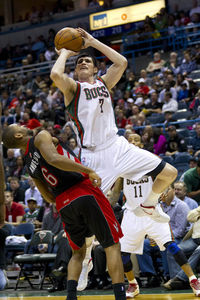 In order to know who we'd be dealing with, let's take a step back & learn about Ilyasova. From Jacob Grinyer of BrewHoop:

While several players on the Bucks made improvements from last year (Brandon Jennings and perhaps Drew Gooden) none were as dramatic or had as much of an impact as Ersan's. Following a quiet year in which his outside shooting mostly seemed to misfire, Ersan made a huge rebound (no pun intended). His three point percentage skyrocketed up to 45%, part of a bigger leap that saw his TS% go up six percentage points. Aside from his leaps in rebounding, his PER of 20.53 puts him in the same stratosphere as Pau Gasol and Kevin Garnett. He had more then his fair share of monster games, including a 25 point, 29 rebound masterpiece in New Jersey that was part of his "Ersanity" campaign. The question is, can he keep these types of performances up? The answer will determine how much cash he receives this summer-- whether it's the Bucks or someone else paying up. NBA General Managers aren't exactly noted for thinking long term, so it's possible-some might say likely-that he may be getting more then his play has warranted. Though his play has been excellent, it has also been somewhat one dimensional, and it's unclear how much of his play was simply due to his contract-year status.

So, what's the big deal with #Ersanity? Let's check the numbers:

So, that's why Ilyasova finished second in the Most Improved Player category (behind ex-Net Ryan Anderson). There's a good amount of stuff to digest so

So we can see that Ilyasova had an above average True Shooting %, but why? If we take a look at his shot charts, we can see a jump in his shot attempts at the rim. In general, you want your big man (really it's any player in general) to shoot above the league average at the rim, so Ilyasova's 60%, which is below the league average for power forwards at 64%, is a little disappointing. However, he more than made up for it by getting to the free throw line more often and excellent three point shooting. He shot 77% from the free throw line, and most importantly, he shot 45.5% from downtown, which was good for second best in the NBA this season.

Rebounding can be tricky sometimes. In some instances, players can "steal" rebounds from their teammates which makes their teammates look like crappy rebounders (see Kris Humphries & Brook Lopez). And other times, rebounding can be "overvalued" by basketball fans (see criticisms against Wins Produced). Be that as it may, on a team of bad rebounders (thanks in large part to the absence of Andrew Bogut), Ilyasova stood out. He was one of the best rebounders in the league when looking at either rebounds per game or rebound rate. And for a team that features poor rebounders minus Kris Humphries, Ilyasova would be a welcome addition.

The Bucks were right around league average defensively (Milwaukee allowed 102.4 points per 100 possessions while the league average was 101.8), but they weren't that great defensively with Ilyasova on the court. They allowed 108.5 per 100 with him on the court vs. 103.6 without him. Now a lot of that is due to Andrew Bogut not being around this year, but Ilyasova's individual defense didn't leave much to desire either. He spent most of the season playing power forward, and opposing 4s had an eFG% of 54% and PER of 18.2 against him, both of which are on the high side.

Speaking of Humphries, he would lose his starting spot if Ilyasova were to join the Nets. But would that be a wise decision? Let's see if we can answer that question.

We can see that Ersanity outperformed Hump in a lot of areas this year. He was more efficient whith his shot, he had way more range to his shot, committed fewer turnovers and converted a better % of his free throw attempts. Humphries was a better rebounder (albeit slightly) so he has the edge in that area. On the whole, Ilyasova graded out better than Humphries when taking a gander through the advanced metrics. Wins Produced tends to like rebounders more than other metrics, so it would be justifiable if one were to be skeptical at that level of production.

Something that piqued my interest was the percentage of field goals that came as a result of an assist from his teammates. Having not seen Ilyasova on a consistent enough basis, it serves as a bit of a puzzle with a few missing pieces in order to understand how he gets his shots. With that being said, Ilyasova was assisted on 76% of his field goals while Humphries was assisted on 68% of his field goals. This goes with the observation made plenty of times that Humphries had too many isolation plays run for him. With a good passing point guard like Williams (if he stays healthy) or Goran Dragic (if the Nets acquire him in free agency), Ilyasova will be in good position to score.

When I did my free agent post on Goran Dragic, I was told that the offer I presented was too low, which was a fair criticism. Whenever discussing free agents, I tend to go on the low end on free agent deals because I'm a penny pincher I try to get the most value out of a player as possible while not devoting too much of my resources to one individual. In certain instances, like if Chris Paul or LeBron James were free agents and the team had salary cap space, I'd throw every dollar I could at them and not wake up the next morning feeling like I made a mistake. I mention all that to say I'm gonna present two offers in this post. The first offer is what I personally would offer Ilyasova. And the second is what I think the Nets will offer. First up, the offer I would make.

If I were the General Manager, I would offer 3 years, $27 million. Why? First, it provides some financial flexibility for the Nets. The three year deal with that money is enticing enough I think for him to sign with the Nets. The flexibility of this deal allows for the Nets to resign Williams and pay Lopez (they could resign Wallace too, personally I wouldn't, but that's another topic for some other time) while leaving enough room to add another solid player to complement them. Also, and most importantly in my opinion, in case Ilyasova sucks or doesn't perform up to standards, it's short enough that the Nets won't be screwed over long term. With Ilyasova on board, that means we'd be saying goodbye to Wins Produced Hero Kris Humphries, but the increase in offense would be worth the trade.

What would the Nets offer? Um, I guess the same thing I offered I guess.

For more stuff on Ilyasova, check out the excellent BrewHoop.

And next up in this series? I don't know, maybe Kevin Garnett or Andre Miller. Or I can take to the trade machine and try to figure out why the hell the Nets are interested in Rudy Gay.