Welcome to the playoffs! While everybody else gets to experience the drama, excitement, joy, despair and injuries of the NBA Playoffs, we here at NetsDaily get to dissect everything that happened to our team this season. Fun, fun, fun, fun. First up in our review of the 2011-2012 season? 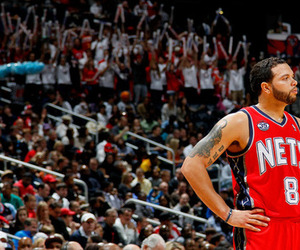 Take the jump and we'll dig into Deron's season.

Our story begins all the way in Turkey. Williams spent some time there due to the lockout and had his number retired. I couldn't find his stats from Turkey (and to be completely honest, they really don't mean much of anything), but he did have a really nice showing while playing for Besiktas.

Williams came back in time for the NBA season. A lot of people (full disclosure, myself included) thought that Deron's time in Turkey would give him a leg up over the majority of players who did not take part in game action during the five month lockout. Did that theory hold true? Let's look at the numbers:

*remember, it was a 66 game season

There's a good amount of things to take from Williams' season. We can see that Deron had to take on more offensive responsibility than he's ever had before (a career high usage rate, which was 7th in the NBA this season). The increase in offensive responsibility was to be expected for two reasons. First, the Nets really didn't have players that could consistently create their offense. And second, and perhaps most importantly, Brook Lopez broke his foot on the last day of the preseason and appeared in only five games this season. Due to that, the Nets needed Williams to carry the offense.

And as it turned out, Deron wasn't able to carry the offense. He was more involved in the offense, but his shooting suffered as a result. Williams was third in shot attempts from 16-23 feet, and was around league average (he shot 39% vs. the league average of 38%). The big change was in the amount of three pointers taken. He led all point guards in three pointers attempted at six per game. Unfortunately, they didn't go in very often. He only shot 33% from three, which isn't what you want when he's fifth in the entire NBA in attempts.

Compared to where his passing has been, it was a down season. His assist rate was way down compared to where it had been as a member of the Jazz, but here is where context matters. I alluded to a lack of options on offense earlier, and when you compare the Nets roster to Utah's, the difference is really glaring. It's really tough to record an assist when you're passing it to Johan Petro, Sundiata Gaines, DeShawn Stevenson & Kris Humphries instead of Carlos Boozer, Paul Millsap, Mehmet Okur (when he didn't suck), Andrei Kirilenko & Wesley Matthews. Also, he spent a lot of time playing at the shooting guard position. I wasn't able to find a specific number, I remember Deron playing a lot of minutes at the 2 this year.

His defense wasn't particularly great either. According to 82games.com, opposing point guards had a PER of 17.8 against Williams. 15 is the league average PER. Also, the team defense (which was already putrid to begin with) became even worse with him on the court. According to 82games, the Nets allowed 111.9 points per 100 possessions with him on the court vs. "only" 108.1 points per 100 with him not in the game.

This was a huge game for Williams. He hadn't been playing well at that point and everyone remembered the Linsanity phenomenon starting on his watch.

Along with that, I had my doubts about Williams in the rematch. In the preview I did for that game, I had that matchup marked as even. So, with the stage being set, how did Williams do that night?

Yeah. He took all the people who wondered about him going into that game and shut them the hell up. Watching it live that night was incredible. Every so often Williams can put together one of those games, and to do it in Madison Square Garden against a good Knicks team made it extra sweet.

March 4th vs. the Charlotte Bobcats in Charlotte

It's kind of sad that the Nets only won this game by three points, but whatever. Very rarely does "one person win a game," but in this one, Williams won this game by himself. He set the franchise record for points and was super efficient in doing so.

Worst game: The home opener vs. the Atlanta Hawks

The Nets were coming off a win in Washington the night before and there was some excitement. Granted, I didn't think they were gonna beat the Hawks, but what happened that night was embarrassing. The Nets were never in it and ended up losing by 36. He couldn't find his shot, had no control of the ball and the Nets were 22 points worse with him on the court than off.

The outlook going forward:. As we all know, Deron will be a free agent this offseason. I honestly don't know where he'll end up so I won't guess. The primary competition for Williams' talents will be the Dallas Mavericks, although there might be some sleeper team that'll try to make a play for Deron. He'll end up getting the max, although I'm wondering if his play actually warrants it. He's battled injuries the past two seasons, and while he is a good player, his past performance (& likely future play as well) hasn't been at that tip top level that max contract players should be at. But, we live in a world where Rashard Lewis and Joe Johnson got max salaries so Williams is gonna get paid big dollars this summer.

Looking at him on court, I think he would be doing himself a big service by cutting down on the three point attempts. I'd rather he look to drive more to the basket and get to the free throw line even more. We hope that Williams can make it through a season unscathed, but I'd take truly excellent play if it meant he missed 10 games or so.