The World's Most Expensive Arena

Share All sharing options for: The World's Most Expensive Arena

The Nets are now marketing Barclays Center as "the first billion dollar arena" and thus the most expensive basketball facility ever built.  Whether the "World's Most Expensive Arena" will be able to compete with the "World's Most Famous Arena" is the subject of a lot of debate, particularly this weekend, as Carmelo Anthony mulls his choices.

Indeed, the certainty of the Nets' move to Brooklyn in 2012 was a key piece of the team's pitch to Anthony in a Los Angeles restaurant Saturday afternoon, ESPN reports. It's not just about architects' renderings or animations  anymore.

So NetsDaily visited the construction site ourselves on Friday morning to see what's up.  The general impression of the scene is that construction is moving at a rapid pace with steel girders and decking going up in one corner of the site, excavation nearing completion in another and the next Transit Center in a third.

More importantly, the shape of the construction is now unmistakably that of a sports arena.

A short video clip showing the site in what will soon become Downtown Brooklyn. 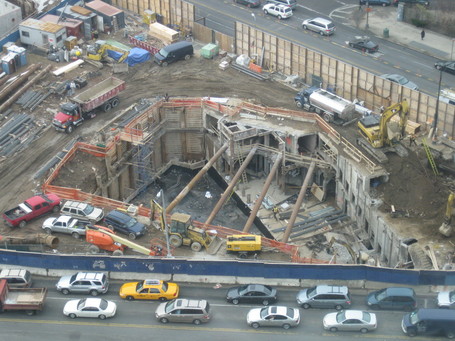 The Barclays Center Transit Entrance, which will link the arena to nine subway lines and the Long Island Railroad. As fans move up the escalator and arrive at the arena plaza, the first thing that will catch their attention is the scoreboard.  With the court 25' below street level, the scoreboard will be at eye level. (NetsDaily) 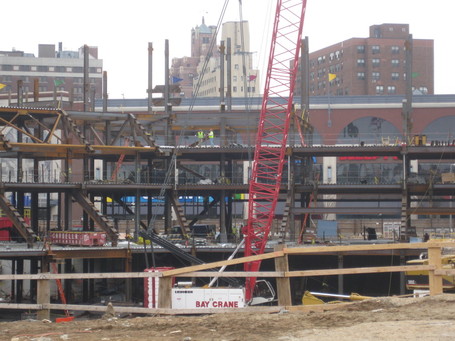 A view of the concourse construction from street level. At this point 25 per cent of all the steel needed for the arena is up, with all of it scheduled to be completed by November. (NetsDaily) 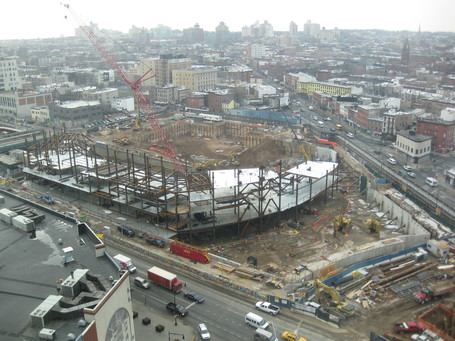 The most recent view from high above the Atlantic Center. Decking has now reached three levels up.  The arena is still on schedule for a June 2012 opening and the first preseason game on October 17 of that season. (NetsDaily) 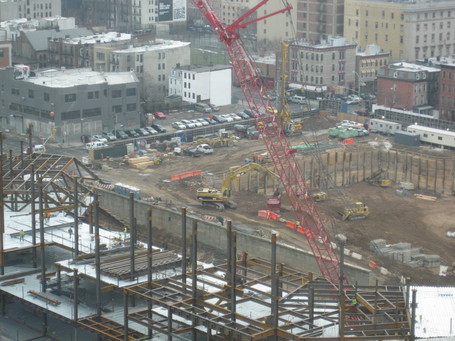 Excavation at southeastern end of the site, opposite the most active construction, is now 90 per cent complete, permitting construction there to begin in that area within the next few months. (NetsDaily) 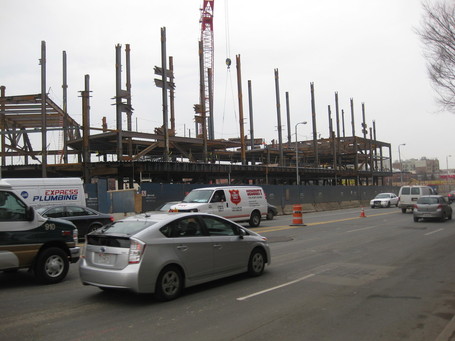 The view along Atlantic Avenue, showing the steel framework rising behind safety fences. The Nets new locker room and basketball operations "campus" will be at below ground level across the street from this vantage point. (NetsDaily) 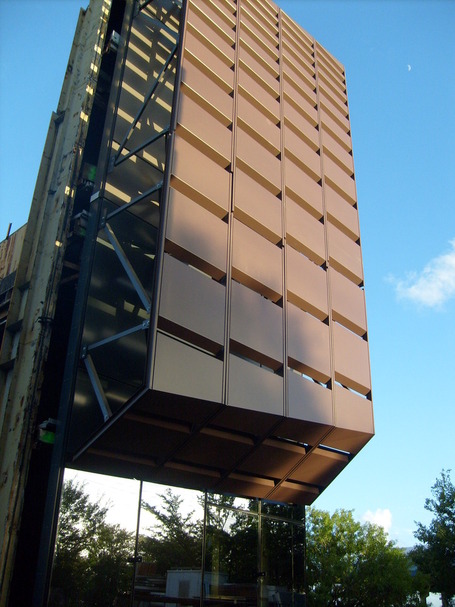 A visual mock-up of the Barclays Center exterior skin, constructed at the factory of ASI Limited, Whitestown, IN. The mock-up will be installed at the construction site next month and the skin itself will begin going up around the arena in summer. (ASI Limited)