Share All sharing options for: Would the Nets Offer Coach K $10+ Million? 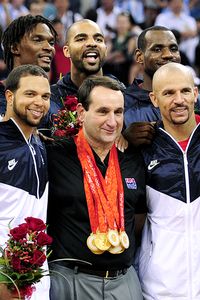 Mike Krzyzewski has said he isn't interested in the job, joked about why a Russian would offer a "Polish guy" a job. But in discussing what the NBA could look like this summer, Brian Windhorst of the Cleveland Plain Dealer thinks Coach K might get an offer he can't refuse. "Some have suggested Krzyzewski might reach eight figures per year" if he's open to Mikhail Prokhorov's offer. He makes $3.6 million at Duke.