Share All sharing options for: Colangelo: Nets Not Happening 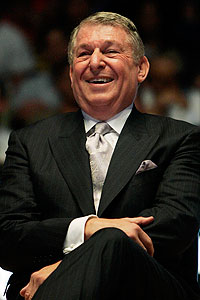 With Rod Thorn seemingly set to return next year, Jerry Colangelo told a Phoenix radio station he's not going to the Nets. Colangelo said Thorn is a good friend and he views the idea of discussing a position already held by someone "distasteful." "The chances of something being so outstanding that it would entice me is remote," said Colangelo. "Because I love where I am, the position I am in life."