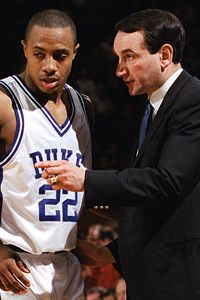 It would be difficult for any college coach to say he's interested in an NBA job when he's still recruiting high school players and pushing his current charges towards the NCAA's. Still, Mike Krzyzewski said after his 1,000th game at Duke (and his 63rd birthday), "No one’s contacted me, and if they do, I think ‘nyet’ would be easy for me to say." He also asked why a Russian, Mikhail Prokhorov, would "hire a Polish guy?"