Did Pitino Make a Pitch for Nets Coaching Job?

Share All sharing options for: Did Pitino Make a Pitch for Nets Coaching Job? 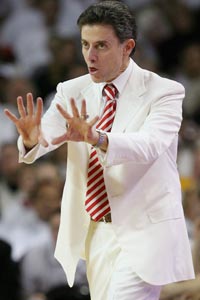 There are conflicting reports about Louisville coach Rick Pitino's interest in the Nets coaching job. "Pitino is interested in the job," a high-ranking team official told Mitch Lawrence. Adrian Wojnarowski tweets that Pitino has been "working back channels". Fred Kerber reports he's tried to reach Mikhail Prokhorov. But Rod Thorn says he has had no contact with Pitino, and the coach says he has "no interest."