That's "Moscow welcomes the Nets to Russia".  The Delta charter carrying the team, coaches, front office personnel and minority owner Bruce Ratner arrived in the Russian capital at 12:20 p.m. Moscow time (4:20 a.m. ET). After the nine hour flight, they were taken to a hotel near Red Square for some rest before embarking on a schedule that will keep them going til midnight.

Throughout the day, we will update the site with the latest from the Nets' world tour, including a team photo in Red Square, the opening of a Nets' store at Adidas Moscow, an open practice and clinic at CSKA Moscow, and the team's first meeting with owner Mikhail Prokhorov.  The team will be in Moscow for a little less than 24 hours.

Prokhorov hired one of the world's top press photographers, Dmitry Beliakov, to follow the Nets around Moscow. Here is a sampling of his photographs (along with those of Leonid Froloff of Prokhorov's public relations firm, Mikhailov & Partners, who worked with NetsDaily.)  The Nets have posted a complete portfolio of Beliakov's work on the team's website. 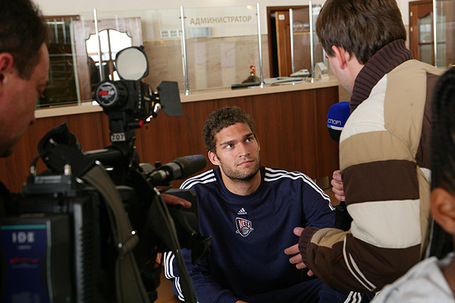 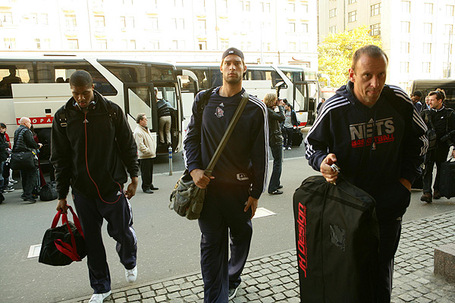 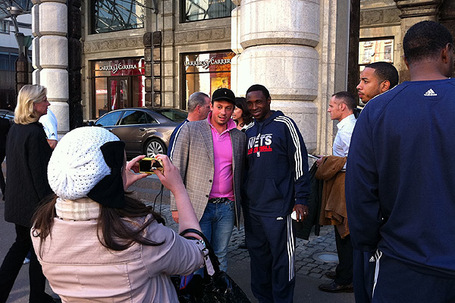 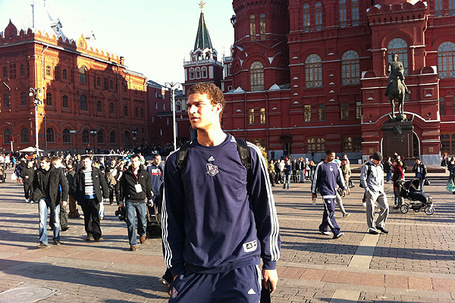 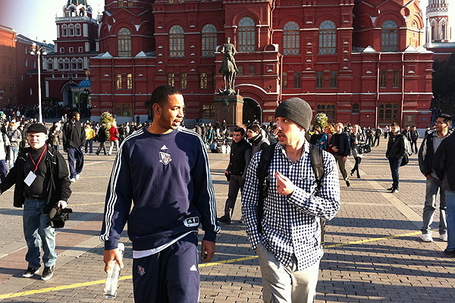 Here captured in videos is the team's day.

Billy King leads the team through Russian passport control, shortly after arrival in Moscow.  The flight was more than an hour late out of Newark, tightening a tight schedule even further. (Leonid Froloff)

Some, still bleary-eyed from the trip, were excited at the prospect of meeting the new boss. (New Jersey Nets)

As Conor Orr and Al Iannazzone wrote Sunday, the trip could help a young team bond. It's a theme Joe Smith touches on as well in this interview for NetsDaily. (Leonid Froloff)

With the tight schedule, the team was rounded up shortly before 4 p.m. (8 a.m. ET) for the official NBA Photo in front of St. Basil's Cathedral in Red Square. A short bus ride from the hotel brought them to the square and the first of  two team photos on the trip.  The other will be at the Great Wall of China. (New Jersey Nets)

Here's a couple of short videos of the scene in the square as the team lined up for the official photo...something about earrings.(Leonid Froloff)

Joe Smith takes a historic stroll around Red Square, talks about what he has already learned about the square's history. (Leonid Froloff)

Devin Harris, Brook Lopez, Derrick Favors, Joe Smith, Travis Outlaw and Jordan Farmar separated from the group to open the new Nets team store at Adidas Moscow, just on the other side of the Kremlin from Red Square.

The official unveiling of the Nets Team Store was truly an unveiling, as a curtain dropped to reveal the store.

The Nets still found time (and a gym) to get in a practice. (Leonid Froloff)

The last public event of the day was a "Celebration of Basketball" on the main court of CSKA's Universal Sport Hall, where 3,000 children, from 8 and 18, watched the Nets work out with top Russian high school and college players and were treated to a laser show and contests...all with the boss in the stands.(Leonid Froloff)

It was during the Open Practice that Prokhorov greeted the team and spoke of his plans for the Nets which haven't changed since he bought the team in May.  Among those on hand were Arkady Dvorkovich, Russian President Medvedev's economic adviser and like Brian Zoubek, a Duke alumni.

Finally, at 11:00 p.m (3:00 p.m. ET), Prokhorov hosted a dinner and reception back at the team's hotel, a mingling of executives from the Nets and Prokhorov's Onexim Group.  Prokhorov told aides he was very happy with the way things went and in particular liked the youth festival.