How to Get Rudy Gay

Share All sharing options for: How to Get Rudy Gay 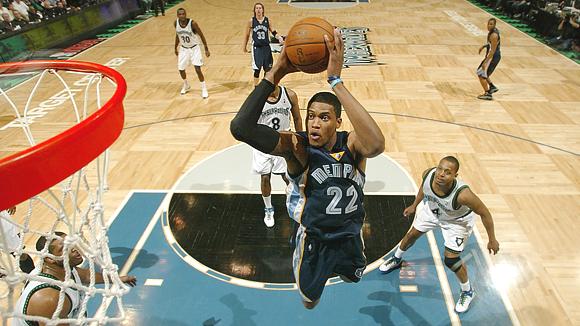 Rudy Gay had a good year for the Memphis Grizzlies, averaging 19.6 and 5.9 for team that was the biggest surprise in the NBA. The athletic 6'8" small forward had a 41-point game early in the season and four others of 30 or more. He's still a defensive liability but has improved other parts of his game as well as his physical strength. He's not so selfish any more for one thing. And he's still only 23, younger than all the other top tier free agents.

And by all accounts, the Nets are interested in him...particularly if they think they don't have much a shot at some of the bigger names like LeBron, D-Wade or Chris Bosh. A month before free agency,  Mikhail Prokhorov mentioned him as a lower lottery draft choice who became a "star".  But unlike the top-tier free agents, Gay will be a restricted free agent in July. The Grizzlies can match any offer made by another team...but will they?

Gay became a restricted free agent last October when he turned down the Grizzlies' last offer, a five-year deal worth about $50 million. He reportedly wanted $15 million more. Gay's message was clear: he’d like to see what he can get this July and then force the Grizzlies to match if they want. Under the collective bargaining agreement, the Grizzlies would have seven days to match any offer sheet sent Gay by another team. It's increasingly rare that teams take that chance because most of the time, the player's team matches.

That's where Prokhorov comes in. Along with the Bobcats, Sixers and the Pacers, the Grizzlies are in bad financial shape. The Nets, with Prokhorov, could be the team that can come up with an offer that would scare off Memphis.

And even if the Grizzlies did want to keep Gay, there are ways around the CBA to make it more difficult. Ask Thorn or Kiki Vandeweghe. They were on opposite sides of the Kenyon Martin poker game five years ago. Here’s what happened and it’s instructive for the future: the Nets said they would wait for Martin to get an offer sheet, knowing only two teams, the Hawks and Nuggets, had enough cap space to sign him to the max deal, which was clearly what Martin wanted. Instead, Vandeweghe called the Nets' bluff and informed Thorn what the Nuggets were prepared to offer: a break-the-bank contract that included a $15 million bonus up front and a 12% trade bonus at the back plus another onerous add-on: Martin would get his first year salary up front rather than over the course of the year. The effect was that the Nets would have had to pay Kmart $23 million on signing…in less than two weeks. Bruce Ratner was, at the point, cash-poor and the Nuggets, i.e. Vandeweghe, knew it. Besides, he had a billionaire owner backing him in Stan Kroenke.

Instead of formalizing the offer sheet, and take the risk that the Nets might match, Vandeweghe decided discretion was the better part of valor: he proposed a sign-and-trade. The Nets would sign Martin to a more standard contract, then trade him to the Nets for three lottery-protected draft picks (two of which were the cornerstone of the Vince Carter trade five months later). Done deal.

Not much has changed since then: teams that offer a restricted free agent a contract can add in a signing bonus of up to 17.5% of the contract total and a trade bonus of up to 15%. So in Gay’s case, if the Nets signed him to a five-year $60 million contract, he can get a bonus of $10.5 million up front upon signing. So for his first year, Gay would get $10.5 million upon signing plus the first year's salary of $9.9 million, either throughout the season, or upfront...his choice. That could mean $20.4 million in salary and signing bonus for the 2010-11 season and maybe all in one lump sum! Think the Grizzlies can afford that when they'll have to sign or re-sign Zach Randolph, O.J. Mayo, Marc Gasol and Hasheem Thabeet over the next three years? The trade bonus is also onerous. If traded at any time in the five year length of the contract, Gay would get 15% of his remaining contract as a bonus.

The Grizzlies understand the situation. They traded for Ronnie Brewer of the Jazz at the deadline, their interest future insurance for losing Gay.