Goldstein: 'I'm Not Going Anywhere...Ratner Could Go Behind Bars'

Share All sharing options for: Goldstein: 'I'm Not Going Anywhere...Ratner Could Go Behind Bars' 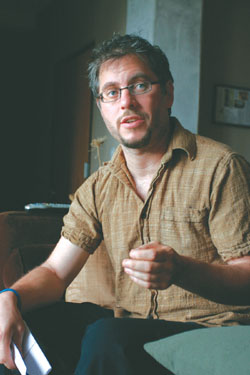 Speaking at a gathering of arena critics at Freddy's Bar, Daniel Goldstein said he decided to pick out new colors for his baby's room after reading a federal indictment of Yonkers officials. "I'm certainly not preparing to find somewhere else to live when he (Bruce Ratner) potentially...has a new place to live behind bars". Goldstein said he's willing to be forcefully evicted, but again said he expects to win the six year battle.