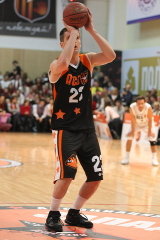 Mikhail Prokhorov is 6'9", his office confirms, so he can look everyone from Sean Williams to Lebron James in the eye. He played a bit as a teenager, then stopped. But in this rare video shot at a charity game last January, we get a look at Prokhorov's post game. More importantly for fans, the video shows who he can recruit: Scottie Pippen and Arvydas Sabonis among others. He enjoys other sports as well.