Share All sharing options for: AK-47: Prokhorov Worth More than $9.5 Billion 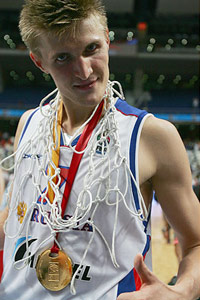 Andrei Kirilenko has known Mikhail Prokhorov since he was 17 and played for him at CSKA Moscow. So when a Utah reporter asked if his old boss was worth $9.5 billion, as reported by Forbes, AK-47 replied confidently, "He's worth more. That's probably the cash that he has." Kirilenko says he knew about the deal a week before it was reported, adding Prokhorov is more about building a team than spending money.