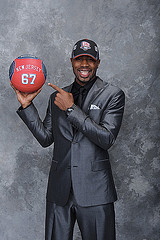 During the 17 days between the end of the NBA Rookie Transition Program in mid-August and the start of informal training this week, Terrence Williams worked out ...alone... at the Nets' practice facility...even at night when he simply shot. Now he's getting a lot of advice from a lot of people. He appreciates it, he says, particularly the part about being aggressive. That's something Lawrence Frank likes to hear.