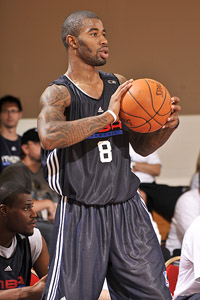 Add Terrence Williams to those who think combining the summer league rosters of the Nets and Sixers was a bad idea. "It doesn't really benefit you at all to go out and play with guys who aren't going to be your teammates when the season starts,'' Williams told ESPN. "You get used to a guy's game, but at the end of the day, it doesn't matter because you aren't going to be playing with them anyway.''