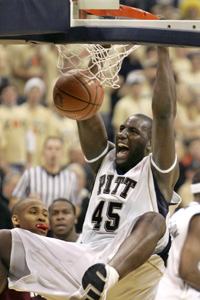 Pitt's DeJuan Blair is the player most linked to the Nets in mock drafts, but recent medical results are making teams nervous. Last week, Chad Ford reported a knee exam was being characterized by GM's as "troubling" even "devastating". Now, says Draft Express, word is that Blair has arthritis which is "a major concern to certain teams." The 6'7" Blair had ACL surgery on both knees in high school.