Share All sharing options for: Is It "Psycho T"? 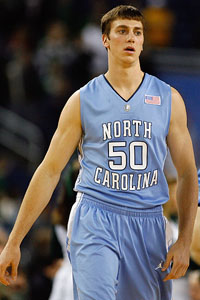 ESPN's Chad Ford has a good track record on Nets' draft picks. He was the first to report the Nets' interest in Zoran Planinic in 2003, Sean Willilams in 2007 and Ryan Anderson in 2008. Who's he got now? Psycho T? Tyler Hansbrough!? Ford says the UNC star has vaulted up the Net board while other forwards "all have issues". He adds Louisville's Terrence Williams is also rising among Nets' brass. Others disagree.