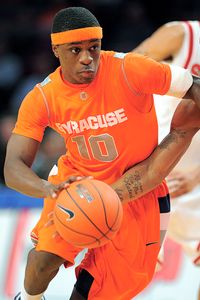 A Nets' survey of the four writers who cover the team plus the Nets' own Ben Couch, Chris Carrino and Tim Capstraw shows a wide gulf regarding even the type of players the seven think the Nets should pick at #11. Syracuse's Jonny Flynn and Louisville's Earl Clark each get two votes with Pitt's DeJuan Blair, Memphis' Tyreke Evans, and Duke's Gerald Henderson dividing the other three.