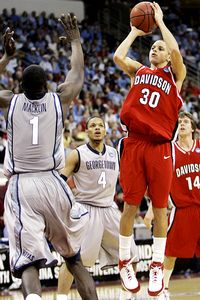 Draft Express reports that Davidson guard Stephen Curry will hold a press conference shortly to announce he is entering the NBA Draft...and the Nets, Knicks and Suns appear to be the teams most interested in taking him. Curry, listed at 6'3", took Davidson to the Elite Eight last season almost single-handedly as a shooting guard then switched to the point this season. He averaged 28.6 ppg and 5.6 apg.