Share All sharing options for: Waiting for Lebron...and D-Wade? 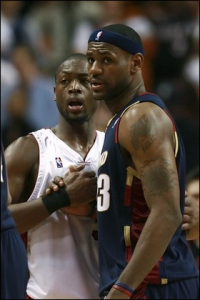 It's only speculation, but expect it to continue til July: the possibility that Lebron James and Dwyane Wade would join forces next summer. They've talked about it. Magic Johnson says it makes no sense--they both need the ball. As things stand seven months before free agency, three teams (including Miami) have enough cap space to do it. Still, an NBC Sports writer contends, New Jersey "might not be a bad place."