AK-47 on Prokhorov: "He’s Going to Turn Around the Team’’

Share All sharing options for: AK-47 on Prokhorov: "He’s Going to Turn Around the Team’’ 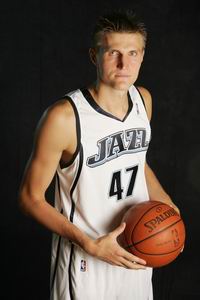 Andrei Kirilenko knows the Nets new owner well. He played for Mikhail Prokhorov at CSKA Moscow from 1998 to 2001. Prokhorov told him about his plans to buy the Nets a week before the deal was announced. He's confident his old boss will do right by the Nets. "He’s looking to bring the team to the top,’’ said Russia's only NBA player. "I don’t think he’s afraid of spending. His mission will be to build a good team.’’