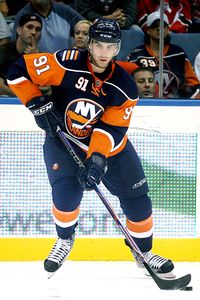 Hours after the Nets sold $500 million in arena bonds, Islanders owner Charles Wang declined comment on whether he's interested in joining the Nets in Barclays Center. Wang, reports the Toronto Globe & Mail, "sidestepped" a Brooklyn question, saying "I don’t want to do this in the press." Wang is pressing Hempstead officials to approve his real estate project. Plans for Barclays Center don't include a hockey "pad".