Share All sharing options for: The Aftermath - Loyer? Harris? 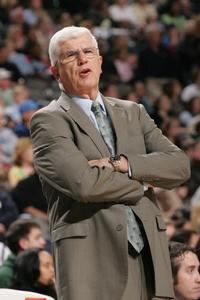 With Lawrence Frank out, the Nets are more likely to choose a successor from the ranks of his assistants, possibly John Loyer, than move Kiki Vandeweghe to the bench. Rod Thorn said he'd also consider outside candidates with former NBA and Team China coach Del Harris among those rumored. The decision to fire Frank got mixed reviews, with most blaming ownership. Mikhail Prokhorov had no comment.