For Davis, It's One Day at a Time

Share All sharing options for: For Davis, It's One Day at a Time 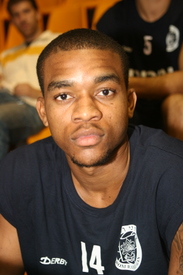 The Nets have yet to waive any of their three camp invites, but at least one of them has a back up plan. Bennet Davis says he's willing to return to the Utah Flash of the D-League if his Nets' gig doesn't work out. The 6'9" Bahamanian power forward played for the Flash last season. He was playing in the Mexican league when the Nets called last month.