Share All sharing options for: My Summer League Adventure 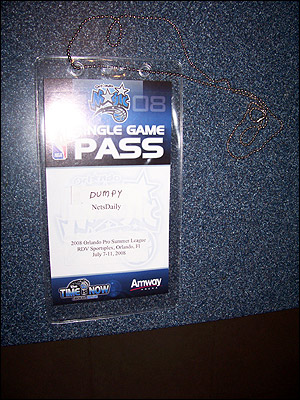 Miles and miles of perfect white sandy beaches. Disney World. Humidity that would curl your toenails. Snakes in the swimming pool. Summer thunderstorms that would put the Kodo Drummers to shame. Living in Florida has its advantages—some might say "quirks"—but nothing can compare to the opportunity to attend the Pepsi Pro Summer League at the Magic’s training facility in Orlando. So when the Nets graciously offered me a press pass for their game Friday against Indiana (thanks Suss!) I jumped all over it. A chance to see the three newest Nets up close and personal? A two-hundred-and-fifty mile round trip to see a glorified scrimmage in a tiny gym? Sounded like a perfect day to me. I was also hoping that Vince Carter would make another appearance so I could (finally) formally challenge him to a footrace, after insisting that I could outrun him in an online preseason guide last fall. He’s got roughly ten years on me, and is (of course) a premier world-class athlete, but is coming off of ankle surgery, so I figure that if I ever have a shot at victory, it would be now. Just in case, I made sure to toss a pair of shorts and a Power Bar into the back of the car.

The RDV Sportsplex in Orlando, which serves as the Magic’s training facility, is the size of a small city, complete with a children’s day camp, two dozen tennis courts, a swimming pool shaped suspiciously like the letter "P" (don’t worry, I couldn’t understand it either), and about seven hundred treadmills and half as many Stairmasters sitting on an open floor. The Magic train in just one corner of this massive structure, accessed through a separate entrance. A press pass was waiting for me and I was in.

The facility was like a high school gym, only smaller and better smelling. It immediately became obvious why this league was not open to spectators: Lack of seating. On one side of the court were small wooden bleachers, about five benches high, and on the other were a few rows of chairs. I chose a discreet seat in the bleachers, across the court from where Rod, Kiki, and Lawrence Frank were sitting, and watched the Nets warm up. 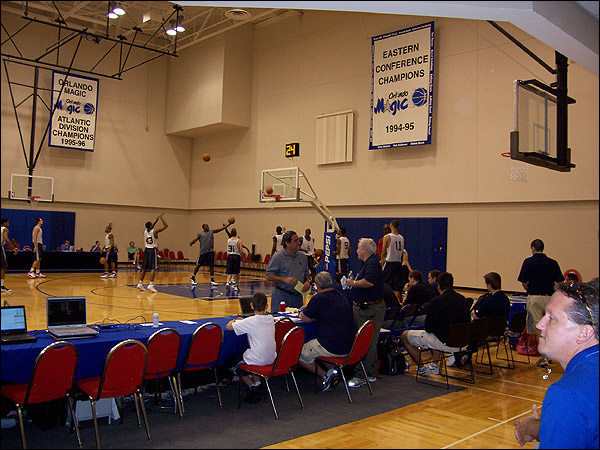 The view of the Nets warming up before the game from my seat in the bleachers. Across the court, in a green shirt, sits Rod Thorn. Next to him are Lawrence Frank and Kiki Vandeweghe (partially blocked out).

My first thought: Brook Lopez is big. REALLY big. My second thought: Why are there so many foreign-speaking journalists sitting in the bleachers around me? They couldn’t really be there to report on pseudo-Pacers Aleks Maric and Vlad Gulobovic, could they? At some point later in the game I realized that they were probably scouts for foreign teams, here to identify a few players to offer contracts to. Third thought: No Vince Carter today. Bummer.

The game soon started, and almost immediately CDR threw up an alley-oop to Sean Williams that clanged off the rim. Not a good sign. Later in the quarter, the pair tried running a give-and-go. It failed, but Sean was fouled and sent to the line. Sean looked active—he seemed to touch the ball on every possession. He was hustling, too: At one point he dove on the floor, scrambling for a loose ball. On the other hand, though, I heard Tom Barrise shout at him several times that he was lining up on the wrong side of the court. Sean, Sean. Brook Lopez showed off a pretty jump hook, and Ryan Anderson got into the act, hitting a long three.

I’ve got to say that it is a totally different experience watching NBA players at eye level and a distance of about fifteen feet. It was a perspective that definitely requires getting used to, and I found it difficult to get a good read on the players’ defense. On offense, there appear to be few set plays other than the pick-and-roll. It’s understandable, since these guys have only practiced together for about a week. Brook Lopez seemed to have problems with the "pick" half of the play, establishing position two feet to the side of the opposing PG’s path, and halfheartedly sticking out his hand to try to slow him down. It didn’t work. Lopez is really big, though. Did I mention that?

The second quarter was more of the same. Jaycee Carroll is running the point, and he takes it to the rim on nearly every possession. At one point, the Nets play a big lineup with Lopez, Sean, and Ryan Anderson in the front court (Anderson came off the bench in this one). It struck me that Ryan was lining up on the offensive end as if he was a SG, hanging out at the top of the arc next to the PG. I watched him hit a couple of three-pointers from straightaway. If that’s truly where Ryan is most comfortable, I could envision the Nets altering his role when he’s on the court with Vince Carter, thus possibly allowing Vince to post up more frequently. We’ll see.

At halftime, the Nets had a one-point lead, 48-47, despite allowing the Pacers to shoot a blistering 63% from the field, including 5-of-10 from behind the arc. That the Nets were even within shouting distance was due to shooting 18 more free throws than Indiana, of which they made all but one. There didn’t seem to be much defense from anyone other than Anthony Tolliver, who received nearly ten minutes of action in the half. Chris Douglas-Roberts led the team with 11 points in nearly fifteen minutes, courtesy of a perfect seven-of-seven from the line. Ryan Anderson had eight, and Brook Lopez six points and two rebounds. Other Nets of note in the first half: Sean Williams with five points and a pair of rebounds in 12:34; Jaycee Carroll with four points on two-of-seven shooting, but just a single assist. Julius Hodge , who entered the week amidst such high expectations, played for all of 3:21, and scored two points. Kiki spent most of the first half on the phone, pacing back and forth along the edge of the gym. Something was up. Rod Thorn happily watched the game in his shorts from his court-side seat, uninterrupted, and letting Kiki do the heavy lifting. Delegation, delegation, delegation.

I then approached N.Y. Post beat writer Fred Kerber, and shyly introduced myself. "Fred? I’m ___, from NetsDaily," I said, using my real name. "Dumpy!" he practically shouted. "Al [Iannazzone] will be so jealous that I got to meet you!" Fred was kind enough to allow me to join him for a bite to eat during the break, during which he filled me in on what Kiki was doing: The Nets were about to sign Jarvis Hayes. In return, I explained why I use the handle "Dumpy." You’ll have to ask him that one.

Then the pace picked up, if that could be possible, and the game became more physical. In the second half, it was the Brook and Ryan show. The Pac-10 duo combined for 31 points after the break, finishing with 25 and 20 points, respectively, with Anderson doing a pretty good Keith Van Horn impression. When Will Conroy entered the game, the Nets looked like they were running a real offense, as he directed traffic and called plays like an experienced PG (he earned three assists in his eight-plus second-half minutes). As a team, the Nets shot a blistering 61% (19 for 31), to pull away from Indiana in the final few minutes and put the game away. The final score was 107-99, an astounding total for a game consisting of ten-minute quarters.

There isn’t much I can add to the game (and the performance of the rookies) that hasn’t already been said by Kerber in his terrific articles and blog entries. Let me add, though, that the greatest impression that I got from watching the game didn't have anything to do with how any one individual played (although you couldn’t help but be impressed by Brook Lopez and Ryan Anderson)--it was that this team desperately wanted to win. As the game became more physical, the bench became more and more enthusiastic, yelling encouragement and cheering on every play down the stretch (best part: Brook was hit on the hand while shooting, and, after no foul was called, Barrise yelling to the ref, "You didn't see it, but you heard it!"). The pride and camaraderie were evident, and those are the first steps to becoming a winner. Just ask baseball’s Tampa Bay Rays, who have gone from doormats to contenders in the course of a season, in part because of the attitude and professionalism brought by off-season acquisition Cliff Floyd, at least according to a number of beat writers covering the team. I know you’re thinking: Big deal, these guys are pros; they should always play hard. Thing is, we haven’t really seen that the past few summers, at least as far as could be discerned from the webcam feed over the Magic’s web site. This year, with these players, things are clearly different. The Nets played hard and played physically, hustled during transition on both ends of the court, and looked like they are starting to bond. I have no idea if they will be any good, but obviously the rookies all showed strengths--not the least important of which was that they look like winners.

And for those looking for good signs everywhere: The three draftees combined for an amazing 29-for-29 performance from the line. For a team that was one of the worst free-throw shooting teams in the league last season, that is a welcome sign.

Finally, I was also impressed by Anthony Tolliver. In this game, Tolliver scored 11 points on 4-5 shooting, played solid defense, and hustled for each of the fifteen minutes he was on the floor. Anthony, I don’t know if you have a future in the NBA, but there’s no reason why you shouldn’t be able to have a career playing this game. Hopefully, one of those foreign scouts was paying attention.

Would I come back to the summer league in the future? Definitely, if they’ll have me. Suss? How about it?