Tatum Wants Another Chance with the Nets

Share All sharing options for: Tatum Wants Another Chance with the Nets 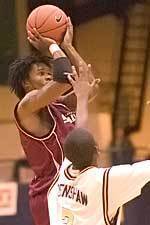 Jamal Tatum looked good in last year's Portsmouth Invitational, then went undrafted. The Nets signed him for their summer league team, hoping he might show some of the defense and long range shooting he was known for at Southern Illinois. He didn't play much behind Marcus Williams and when he did, he didn't play that well. Now after a season in the D-League, the 6'-2" point hopes for another summer gig.