Too Early to Think About the Draft? Nah.

Share All sharing options for: Too Early to Think About the Draft? Nah. 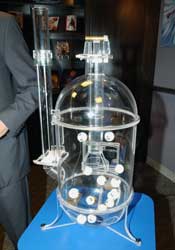 March is the month for drafniks. The NCAA Tournament is on and scouts are out in full force. Same thing overseas as the Euroleague and then the national leagues have their Final Fours. With the Nets having two first round picks and a second rounder, this March promises to be active for team officials and fans alike. We look at the early mock drafts and note the Nets have already scouted UConn's 7'-3" Hasheem Thabeet.