Zo's Take on His Time With Nets Revealing but Incomplete

Share All sharing options for: Zo's Take on His Time With Nets Revealing but Incomplete

In his autobiograpy, "Resilence: Faith, Focus, Triumph", Alonzo Mourning writes briefly about his time--actually two times--in New Jersey, first after his diagnosis with kidney disease, then after his kidney surgery. Although Mourning paints a negative portrait of the Nets management, and particularly Bruce Ratner, he does not repeat his claim that Rod Thorn and Lawrence Frank had tried to kill him by playing him too many minutes after his transplant. 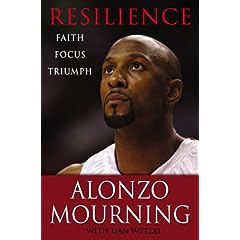 Here are some of what he writes:

--Rod Thorn was just as interested in signing him in 2003 as Jason Kidd. He also notes that the Nets were one of five teams to offer him a contract that off-season and that three of them--the Nets, Mavs and Grizzlies--had offered him multi-year MLE deals. One team, Kiki Vandeweghe's Denver Nuggets, had offered him a one-year, $14-million deal. As previously reported, the Heat offered only a one-year vets' minimum contract. He accepted the Nets' offer of an MLE.

--Mourning calls Kenyon Martin a "very tough but at times immature forward" and provides an alternative story line to the one often reported. In the original telling, reported at the time, Mourning and Martin had had an argument over KMart's commitment to training. Mourning had told Martin he was tired of hearing "my ankle, my ankle" from him. According to the original story, Martin then responded, "my kidney, my kidney" which led Mourning to come after him. In this retelling, Mourning says the argument was indeed over Martin's training regimen--"he didn't always practice hard"--and that he told KMart that the young Net was supposed be one of the team leaders but he wasn't seeing it. Martin, says Mourning, responded about how could Mourning be the Nets' center when he couldn't even grab a rebound. Yes, reports Mourning, he did have to be restrained. "I excused him, but I didn't forget".

--Mourning writes that after the Nets' two visits to the finals, "the Nets had a lot of little cliques and some of the players were really full of themselves".

--His kidney specialist warned him after his best game with the Nets, a 15-point effort against the Raptors, that he could had cardiac arrest and "die on the court". He ordered him to shut down.

--He denies that his return to the Nets was caused by his desire to get back to Miami and play with Shaquille O'Neal...but he notes he was in Miami when the Shaq deal was struck and how it led to championship-like excitement. "I couldn't worry about Shaq, the Heat or really, anyone but me. My mind was in Jersey". Not for long, however.

--Mourning admits he "wasn't thrilled with playing for the Nets" adding that "right as the Heat were trading for Shaq in an effort to contend for an NBA title, the Nets made a deal with the Denver Nuggets to trade for Kenyon Martin". Noting their past differences but understanding KMart's role with the team, Mourning writes "We didn't get anything in return for that trade." (Mourning fails to note that his decision to rejoin the Nets came after the Martin trade.) He blames Ratner for breaking up the team.

--Although he was happy with his progress, Mourning says the frustration of playing with the Nets (who were still awaiting the return of Kidd from knee surgery) had gotten him down. "I hadn't undergone a kidney transplant and then an agonizing nine months...to play for a team that wasn't commited to winning a championship."

--Finally, he said he demanded a trade from the Nets, although reports at the time had him focusing not on a trade but on a buyout of his contract. One report noted that he wanted $10 million of the remaining $15 million on his deal but the Nets were only offering $3 million. "I wasn't going to play for an organization I didn't believe in. I decided to force the issue and in December of that year, I didn't go on a road trip with the team." At the time, the Nets said Mourning was suffering from a number of nagging injuries, not that he was essentially on strike.

--The trade to Toronto, he writes, was "going from bad to worse". The Raptors were 8-17. Before the trade, he reveals, Rob Babcock, the Raptor GM, told Thorn he thought Toronto could get him "to come in and be a veteran leader for the young guys" even though Thorn told them it was unlikely. The Raptors made the deal anyway because "they were so eager to get rid of Vince Carter who fans had turned against."

--Mourning and his agent played a game of chicken with Babcock, telling him in a meeting that if they didn't release him, he would retire which meant "the Raptors were on the hook for nearly $15 million." So without ever crossing the border, Mourning received a $9 million buyout, permitting him to sign a vets minimum deal with the Heat and ultimately win the NBA championship.