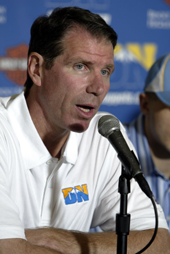 Kiki Vanderweghe, the former Nuggets GM who engineered the signing of Kenyon Martin, is a possible replacement for Ed Stefanski. Vanderweghe who lost his job in part because Martin has disappointed in Denver is one of a handful of candidates, which also include former GM's John Gabriel and Rick Sund and YES analyst Mark Jackson. The key is finding a talent evaluator equal to Stefanski.