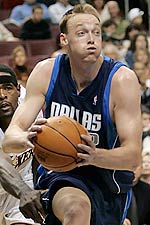 Keith Van Horn, a key member of the Nets first NBA finalist in 2002, Monday compared New Jersey's fans to those in Dallas and found the Nets' followers wanting. In particular, the 1997 Net draft pick noted how fans flocked to the airport this weekend to greet the team after they beat Phoenix. Not so in 2002 for the Nets after they beat Boston, said Van Horn. No one was at the airport, he said, disappointing the team.