Share All sharing options for: Euro-Net Schedules Firmed Up 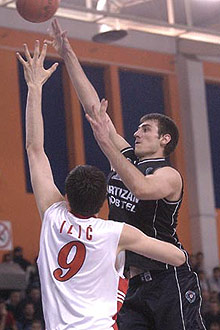 With Nenad Krstic finally deciding not to play in the World Championships this summer, Nets fans can breathe a sigh of relief. The 7-footer admits that he needs the rest as well as the opportunity to bulk up for the most important season of his NBA career, the one on which his future earning power will be based.

Still, as schedules for National Teams get firmed up, it will still be a hectic summer for Zoran Planinic and Boki Nachbar, with both expected to play more than 15 games for Croatia and Slovenia in international competition and not just in the well-publicized FIBA tournaments. Each will also play in a number of exhibition tournaments around the world.

Same goes for previous Nets draft picks. Mile Ilic [Serbia] has been invited to the Serbian National Team tryouts and is now almost certain to be selected with Krstic staying in New Jersey. Christian Drejer [Denmark], will be playing as well, expected to face off twice against Planinic in the Eurobasket Qualifying Round.

Until early July, the big question was whether Krstic himself would play. Many thought that speculation ended in late June. In an interview with Sportski Zurnal, Krstic had hinted he might not play and wanted to talk to Serbian National Team coach Dragan Sakota before deciding. Then, it appeared he has made up his mind to play, but only after a meeting with Serbia's President, Boris Tadic. With days before the Serbian team's first practice, Krstic insisted he hadn't decided. Finally, when the team gathered in Belgrade for its first team meeting, he was a no-show and Sakota had to admit he wasn't coming. Krstic found himself the victim of tirades from the Serbian basketball association before disclosing why he had decided not to compete.

Nachbar has already been named to the Slovenian National Team and Planinic is in Europe for the summer, waiting for the Croatian team to begin practice.

All have previous international experience: Nachbar with his country's Olympic team in 2004; Nachbar, Planinic and Drejer with their countries' Eurobasket championship teams in 2005 as well as international youth tournaments stretching back to 2000. Ilic played with the gold medal-winning Serbian entry at the World University Games in 2003.

But beyond that, there are exhibition games scheduled for the weeks prior to the more high profile match-ups. These so-called "friendly" games will take the Nets players far and wide.

Ilic will play games in Serbia, Italy, Spain and Singapore before arriving in Japan; Planinic in Croatia, Greece, and Bulgaria before enduring home-and-away Eurobasket games in Denmark, Latvia and Estonia. Nachbar should be just as peripatetic. He will be playing in Slovenia, Turkey and Singapore before Japan. Drejer was expected to play in Finland, Belgium and Bulgaria before participating in the same Eurobasket round-robin as Planinic, but the Danish NT coach has given him off til the Eurobasket games.

With so many games, it's likely the Net players and draft choices will find themselves on opposite sides of a jump ball during the summer. Planinic and Drejer are scheduled to face off against each other in home-and-away games on September 3 and 13, the first game in Croatia, the second in Denmark.

Ilic and Nachbar could face off in an exhibition game in Singapore on August 13 or during the World Championships in Tokyo in early September. Nachbar's Slovenian team is already scheduled to play against Team USA, matching him against players like Kobe Bryant and Lebron James. Ilic, whose nickname in Serbia is "Yao Mile", could face the real Yao in the Worlds.

Here is the schedule for the Euro-Nets:

August 7 - 13:
Serbia-Montenegro [Ilic] participates in Singapore exhibition tournament in Singapore, along with teams from Slovenia [Nachbar], Spain and Argentina.

August 19 - September 3:
FIBA World Championships, Tokyo and other Japanese venues. Serbia-Montenegro [Ilic], the defending world champs, opens up against Nigeria in the city of Sendai, games against France, Lebanon, and Venezuela in the opening round.

July 31-August 2:
Croatia [Planinic] participates in Acropolis exhibition tournament in Athens, Greece, along with national teams from Greece, France and Italy. Croatia loses to Greece and France before defeating Italy.

August 6-20:
Croatia [Planinic] participates in Crikvenika exhibition tournament in Croatia along with teams from Venezuela, Panama, Czech Republic and Russia.

August 22 - 24:
Croatia [Planinic] participates in Varna exhibition in Varna, Bulgaria, along with teams from Bulgaria, Russia, and Israel.

August 31 - September 16:
Eurobasket 2007 Qualifying Round. Croatia [Planinic] and Denmark [Drejer] are among 16 national teams jockeying for position in the 2007 event. Planinic and Drejer are scheduled to face off against each other in home-and-away games on September 3 and 13, the first game in Croatia, the second in Denmark. Both teams will also play home-and-away games with Latvia and Estonia.

July 28 - 31:
Slovenia [Nachbar] travels to the capital of Turkey, Ankara, for the Efes Pilsen tournament featuring the national teams of Turkey, Lebanon and Qatar. Slovenia goes 2-1, losing to Turkey.

August 7 - 13:
Slovenia [Nachbar] participates in Singapore exhibition tournament in Singapore, along with teams from Serbia-Montenegro [ Ilic], Spain and Argentina.

August 19 - September 3:
Slovenia [Nachbar] opens up against Senegal in Sapporo, then plays Italy and the two American teams, Team USA and Puerto Rico.

August 31 - September 16:
Eurobasket 2007 Qualifying Round. Croatia [Planinic] and Denmark [Drejer] are among 16 national teams jockeying for position in the 2007 event. Planinic and Drejer are scheduled to face off against each other in home-and-away games on September 3 and 13, the first game in Croatia, the second in Denmark. Both teams will also play home-and-away games with Latvia and Estonia.

Of course, none of the American Nets will be playing for Team USA this summer, although Jason Kidd and Vince Carter won gold medals in the 2000 Olympics, Richard Jefferson won a bronze in the 2004 Olympics and Antoine Wright won a bronze medal in the 2002 Junior World Championships Qualifying Round.