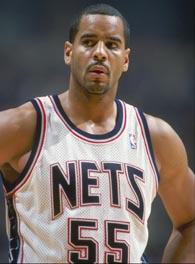 Exciting on the court, the Nets have been pretty boring off it in recent years. Jason Kidd had his problems, but they took place while he was with the Suns. Marcus Williams and Hassan Adams were in college when they crossed the law. Not so in the early 90's, says former Nets president Jon Spoelstra. Spoelstra points out that one year six members of the team were jailed, but "not together, because that would have meant teamwork."