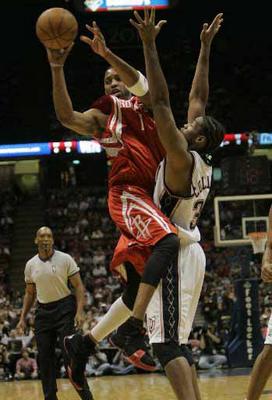 The Nets struggled for the second straight night Saturday as they fell to Tracy McGrady and the Rockets at the Meadowlands. New Jersey shot just 37% from the field and McGrady exploded for 30 second-half points in his first game since opening night, leading Houston to a 99-91 victory. Vince Carter was 6-19, Richard Jefferson was 3-9 and Nenad Krstic was 2-10 from the field. The Rockets led by 17 early in the third quarter, but the Nets climbed back to within 3 early in the fourth. That would be as close as they got as McGrady scored 20 points in the fourth. Jason Collins played after missing Friday's game, but left with an injury early in the second half.